This was a surprise find on my visit to the Thomas Merton Center. (And a neat find, since I'm teaching animal ethics right now.) In a display case that had been put together for a recent conference on Merton and ecology, I found this typed statement by Merton:

Since factory farming exerts a violent and unnatural force upon the living organisms of animals and birds, in order to increase production and profits, and since it involves callous and cruel exploitation of life, with implicit contempt for nature and for life, I must join the protest which is being uttered against it. It does not seem that these methods have any really justifiable purpose except to increase the quantity of production at the expense of quality: if that can be called a justifiable purpose. However, this is only one aspect of a more general phenomenon: the increasingly destructive and irrational behaviour of technological man. Our society seems to be more and more oriented to overproduction, to waste, and finally to production for destruction. Its orientation to global war is the culminating absurdity of its inner logic, or lack of logic. The mistreatment of animals in “intensive husbandry” is then part of this larger picture of insensitivity to genuine values and indeed to humanity and to life itself— a picture which more and more seems to display the ugly lineaments of what can only be called by its right name: barbarism.

The statement was included in a pamphlet entitled, Unlived life : a manifesto against factory farming, edited by Roger Moody, (Bristol: Campaigners Against Factory Farming, 1965 (or '66)). The statement is also quoted in full here.
Posted by Matthew Pianalto at 7:02 PM 0 comments


"You can imagine that a lot of people saw Socrates coming and said, ugh, that guy."

Of course, I would surely not have been one of those people...
Posted by Matthew Pianalto at 6:46 PM 0 comments 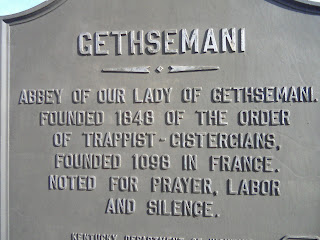 EKU is on Fall Break today and tomorrow, so I decided to make a pilgrimage to the Thomas Merton Center at Bellarmine University in Louisville, and then to the Abbey of Gethsemani, where Thomas Merton lived. When I was an undergraduate, I took a course on Merton's life and work from Lynne Spellman, at a rather critical point in my life. It was reading Merton that led me to appreciate that there is a kind of religious thinking that is worth taking seriously.

One purpose of my trip was to listen to a recording of Merton's on patience and Sufism, which was a lecture to novitiates. I had not heard recordings of Merton before, and his voice and manner are quite engaging. This is the kind of thing he says to the new monks (always in a serious tone, but not so serious that he cannot also be, in subtle ways, funny): 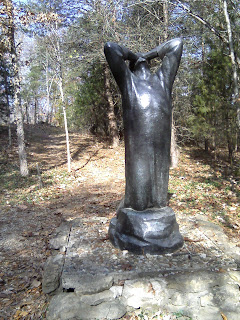 "love means trials…love and trials are inseparable...you don’t have one without the other, and that goes for Divine love and for human love…and I feel that today, there is a tendency everywhere, in religious life and out of religious life, for people to start kidding themselves that you get the love without the trials. You don’t."

Fair enough, I think. (Remembering this kind of thing when the kids are freaking out is harder.) 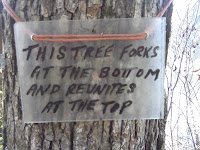 I took a nice walk along a trail with various religious statues scattered through the woods (including the striking one above). The air was cool and the sun bright. On my way back I noticed this peculiar sign (to the right), and then looked up (see below). Even the trees, so it seems, are praying at Gethsemani. I don't pray, but I did have a nice sit in the woods. It occurred to me--it has been in the process of occurring to me for a long time--that life is strange. I often wonder, "Where are we going?" (And "are we there yet?") This relates to my prior post on animal research (and Duncan's semi-response) in ways that I would like to explore further at some point. I don't think that "enjoying the ride" or "stopping to smell the roses" is quite the right way to get re-oriented. (I think this is what Duncan was getting at, too.) 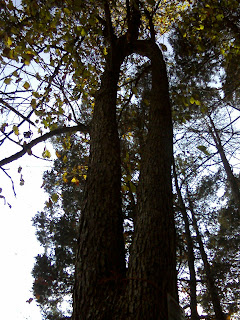 
By doing we forgo.—Basically I abhor every morality that says: "Do not do this! Renounce! Overcome yourself!" But I am well disposed toward those moralities that impel me to do something again and again from morning till evening, and to dream of it at night, and to think of nothing else than to do this well, as well as I alone can! When one lives that way, one thing after another that does not belong to such a life drops off: without hate or reluctance one sees this take its leave today and that tomorrow, like the yellow leaves that every faint wisp of wind carries off a tree. Or he does not notice that it takes its leave--so sternly is his eye set on its goal, entirely forwards, not sideways, backwards, downwards.'What we do should determine what we forgo; in doing we forgo'--that's how I like it; that is my placitum. But I do not want to strive for my impoverishment with open eyes; I do not like negative virtues--virtues whose very essence is negation and self-denial. (The Gay Science, 304)

It may seem odd to be thinking of Nietzsche after a day at a monastery. (Isn't that precisely the self-denial that Nietzsche doesn't like?!) But somehow I think it can all fit together, because in both cases total devotion takes the place of all the various kinds of pettiness, distraction, and drifting. (And if one reads Nietzsche it becomes clear that there is a love of life there which, if followed, would prevent single-minded devotion to truly ugly aims--at least one would hope!)
Posted by Matthew Pianalto at 12:44 AM 13 comments