I've been lying low lately, taking in many ideas, preparing to write (the first draft of) what I hope will be the final chapter of my book on patience. (Don't get too excited; there's still a long road of revision ahead.) I've also been trying to make sense of the literature on "theory of mind" in chimps and other non-human primates, which is an altogether different story.

I just finished a very nice paper by Matthew Ratcliffe, "What is it to lose hope?" In it he distinguishes between forms of hope that have clear propositional (or, intentional) content and a kind of hope that is "pre-intentional" and which he also characterizes as an "existential feeling." This kind of hope--which it seems to me could also be described as a fundamental attitude or orientation--is a sort of background against which it makes sense to have any hopes of the other, intentional/propositional sort. What he's doing seems good, and useful, too, as he points out that these different forms of hopelessness vary in severity, and it's not clear that the Beck hopelessness scale (used in psychiatry) really measures those important differences.

Ratcliffe's distinction suggests that we could lose most, perhaps even all of our hopes, without necessarily losing hope. He suggests this might be a way of understanding Plenty Coups, or Lear's reading of Plenty Coups. But it's not that Plenty Coups musters up a new, radical kind of hope (as Ratcliffe reads Lear) but rather that he manages not to lose his grip on the pre-intentional sort of hope.

One might ask: how is pre-intentional hope different from what we call optimism? Ratcliffe doesn't address this.

In "Sketch of a Phenomenology and Metaphysic of Hope," Garbiel Marcel suggests that the optimist "is he who has a firm conviction, or in certain cases just a vague feeling, that things tend to 'turn out for the best.'" Thinking of Liebniz, he also says that "the optimist is essentially a maker of speeches," and the general upshot of his characterization is that the optimist is superficial: "the optimist, as such, always relies upon an experience which is not drawn from the most intimate and living part of himself, but, on the contrary, is considered from a sufficient distance to allow certain contradictions to become alternated or fused into a general harmony."

Well, what's wrong with that? one might ask. Marcel distinguishes different sorts of hope, and notes that hope can be degraded, but also suggests that the higher or more ideal sorts of hope don't involve the distance, abstraction (or rationalism, as it were) that he associates with optimism. He also says that true hope contains "humility...timidity...[and] chastity," and I suppose that means that true hope is not the sort of thing one could make a big speech about.

The hope Marcel idealizes looks like a kind of pre-intentional hope, insofar as the kind of hope he sees as most genuine has a kind of flexibility; it doesn't pin itself on specific states of affairs coming to be, and seems connected to a kind of commitment not to "capitulate" in the face of life's trials. This is, he says, related to patience, both with life and with others. (And one kind of loss of hope is when we give up on another person in some absolute sense, deem them useless, etc. This is also connected to a loss of patience.)

Of course, there seems to be a question here about whether one can sensibly always retain such hope. At least, as I started reading and thinking, I thought that was the question. But I'm less sure now. There are practical questions about how long we should try to fix a relationship or teach something to another person (before giving up on that particular relationship or task), but giving up on those things isn't necessarily impatient and doesn't have anything to do with this pre-intentional hope. The loss of this sort of hope in major clinical depression suggests both that it's very important for any sort of decent life and that it's not something that can obviously be summoned on demand. And so how? seems like the wrong question. It might, however, be that it's this kind of hope that serves also as the background of the possibility of patience (and, of course, the exercise of any kind of skill or virtue that places some hope in the future or in the immediate meaningfulness of life's activities).

I'm just pondering (rambling), so I'll stop. How are you? I'll leave with this bit from Marcel's essay, which caught my attention, and reminded me quite a bit of things that William James says:


Perhaps the human condition is characterised not only by the risks which go with it and which after all are bound up with life itself, even in its humblest forms, but also, and far more deeply, by the necessity to accept these risks and to refuse to believe that it would be possible--and, if we come to a final analysis, even an advantage--to succeed in removing them. Experience teaches us, as a matter of fact, that we can never refuse to take risks except in appearance, or rather that the refusal itself conceals a risk which is the most serious of all, and that it is even possible for us finally to condemn ourselves in this way to lose the best of the very thing which by our avoidance we had intended to safeguard. (pgs. 54-55 in the Harper & Row (1962) edition)


Posted by Matthew Pianalto at 11:15 AM 6 comments 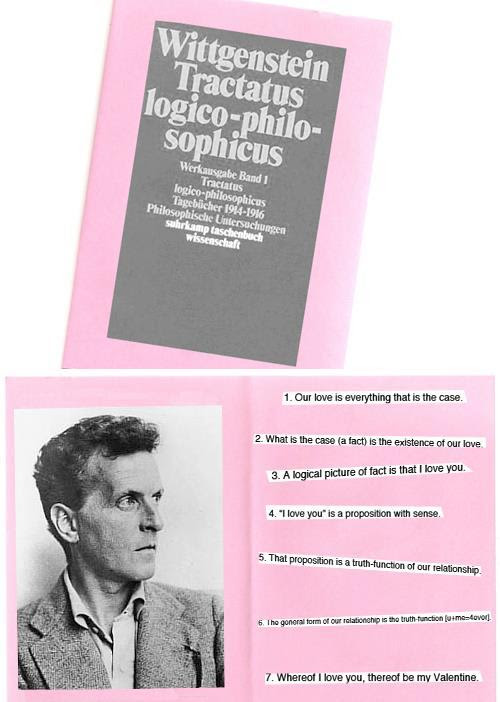 http://intellectualvalentinesday.tumblr.com/post/17129218726/ludwig-wittgenstein-tractus
Posted by Matthew Pianalto at 2:00 AM 0 comments

"...Blessèd sister, holy mother, spirit of the fountain, spirit of the garden,
Suffer us not to mock ourselves with falsehood
Teach us to care and not to care
Teach us to sit still..."
Posted by Matthew Pianalto at 3:05 PM 0 comments