I've mostly been a mole in the ground lately. Lots of reading about philosophy of music and art in general. A little writing on music and value (responding to some puzzling yet repeated claims by Alan Goldman). I'm going to try teaching philosophy of art in the spring. If you have any favorite books or articles or other tips, send them my way.

And I've been up to quite a bit more of this, which is partly why I've gotten interested of late in arts and aesthetics issues:

Vladamir Jankélévitch refers to Tolstoy's The Kreutzer Sonata when discussing Tolstoy's negative views on music (in his Music and the Ineffable). I was intrigued so I found a copy. Doris Lessing is surely right in describing it as a compelling read (in her introduction to the edition I got). But in light of Tolstoy's aims in writing the book, it is truly bizarre. (A real counter-point to my big summer read last year, Anna Karenina.)

What we get is a story of sexual desire, jealousy, and self-hatred, told by a man who murders his wife on the basis of some truly paranoid suspicions that she cheating on him. In the "Sequel" to the book, Tolstoy reiterates his conservative arguments on sexual morality and marriage. But it is truly perplexing to think that he could have seen this book as a good argument for his positions (not only because many of his own ideas are put into the mouth of a murderer). For all the while, as I read the narrator's bitter views on sex and marriage, I find myself thinking that for all the bluster, this guy is just unhappy and doesn't know how to deal moderately with his own sexuality.

Furthermore, as Lessing discusses, there is the problem of not really giving any even-handed consideration to the female (heterosexual) perspective. Lessing does a nice job of trying to help us imagine sexual life in the 19th century (no birth control), and Tolstoy's (and his wife's) life in particular (she makes a lot, quite to the point, about the number of children they had). But she also rightly, I think, sums up the "philosophical" aims of the work as those of a "fanatic," locked tightly into an ideological perspective that is not only unrealistic (Tolstoy responds to that charge in the Sequel) but also paradoxically oblivious to the complexity and varieties of sexual intimacy. (Lessing speculates that perhaps Tolstoy wasn't good in bed, which would explain the frustration surrounding some of the discussions of sex.) Tolstoy's dualism--sex is "animal," "man" should transcend "animal nature"--forces sex to remain "dirty" and something to be avoided. But there's a false dichotomy here, if you think we can accept our "animal nature" and yet remain "human," where acceptance means something other than trying to get as far away from the animal as possible. As Lessing points out, Tolstoy "went at it" into his seventies, and so maybe part of the problem (as with his narrator) is that he happened to have a rather strong sexual appetites. But this is the sort of thing I despise: projecting your own personal struggles onto humanity as a whole, such that we are all assumed to have the same problem, and then giving your personal plan or cure as the norm for all.

Read as a story about sexual frustration, jealousy, and madness, it's a real page-turner. But I'm not sure I would go to Tolstoy for relationship advice.
Posted by Matthew Pianalto at 12:37 PM 0 comments

Forgot to mention this with my other big announcement: my article "Nietzschean Patience" is now available Online First in The Journal of Value Inquiry. There are also several other papers there on Nietzsche and virtue. (These are to be published as a special issue; my article just happened to get accepted around the same time. A nice coincidence!) Enjoy.
Posted by Matthew Pianalto at 3:17 PM 2 comments

I am pleased to announce that my book On Patience is now under contract with Lexington Books (an imprint of Rowman & Littlefield)!

I will turn the manuscript by early next month, and there will be a peer review process, presumably with some improvements to be made. (So my post title should perhaps be "Coming Sooner or Later, But It Is Coming...")

When I'm not working on that, I'm about ready to start sketching out some more reactions to the reading I've been doing on the philosophy of music. Stay tuned for that and for updates about the book!
Posted by Matthew Pianalto at 1:04 AM 2 comments

Email ThisBlogThis!Share to TwitterShare to FacebookShare to Pinterest
Labels: Patience

I mentioned Jankélévitch's Music and the Ineffable in my last post, and I want to thank Jay Langguth, a philosopher at Thomas More College, for bringing the book to my attention. If I understood the book correctly, Jankélévitch adopts the view that music does not "express" emotions or ideas (in any sense of "express" that is linguistic, so to speak) but rather imitates the rhythms and "atmospheres" of "life, freedom, [and] love." He's talking about instrumental music ("pure music" in the terminology of philosophers of music). I'm not sure I agree, but it's an interesting view to consider, especially when thinking about music without words/lyrics. I would accept that some music takes that form, or is fruitfully understood in this way.

Any way, here's a nugget to ponder from the last chapter (on music and silence): "Music is a sort of silence, and one needs silence in order to hear music; the one silence is necessary to hear the other, melodious silence. As melodious, measured noise, enchanted noise, music needs to be surrounded by silence. Music imposes silence upon words and their soft purring, that is, upon the most facile and voluble noise of all, the noise of idle chatter." -- Vladamir Jankélévitch, Music and the Ineffable (139-140)

And a video of a slow, quiet tune I worked up the other day on the fretless banjo, "based on a true story" (see title). A lot of banjo playing is fast, but I also find myself interested in tunes that work at a slower tempo (and not just because I have a slow and clumsy left hand).

Posted by Matthew Pianalto at 11:53 AM 0 comments

It goes without saying that I've gotten away from the blog and from keeping up with other blogs. (I do miss the discussions I had with some folks on our blogs). You'll see what happened to "blog time" below. Here's a sort of year-in-review, since it's been almost a year since I last posted.

I received tenure this spring, starting in the fall. (That's a pic of the application.)

I continue to work on getting my patience manuscript placed with a publisher and will spend some time this summer doing some tweaking. Also, look for an article by me on "Nietzschean Patience" in The Journal of Value Inquiry some time soon. (It's in press as of now.)

For a year, I'll be the President of the Kentucky Philosophical Association. The annual meeting will be at Bellarmine University some time in late March or early April.

I'm also coordinating the summer programming at the local Unitarian Universalist Fellowship. The community minister recently gave me a bumper sticker that she said reminded her of me. (Thanks, I think!)

I taught a very interesting honors course with Christopher Jackson of EKU's Department of Art & Design called "Arguing with Images." We examined the idea of "visual arguments" and spent time looking at philosophical and visual arguments on issues like abortion, animal ethics, and in politics. The students created their own visual arguments at the end of the semester and some of them were quite impressive. This class has also continued to steer me, along with a recent thesis I mentored and a paper I commented on recently, into that other realm of "value theory" that is aesthetics.

Right now I'm reading Vladamir Jankelevitch's Music and the Ineffable, and have also been reading stuff on, roughly, "the limits of language." My position right now is still that there aren't the kinds of limits to language that the early Wittgenstein insisted; I think that those who claim that there are things within our cognitive and experiential grasp that "words can't express" forget about the power of figurative and poetic language and that those uses are part of language, too. I've been trying to write on this a bit, but it's all mostly taking the form of notes right now. I need to read more. 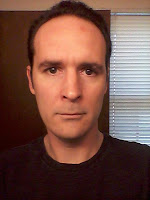 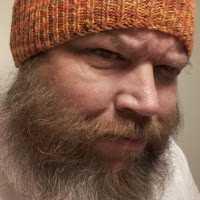 I shaved (left), which was a real shock to my children. (I also have a new scar on my forehead from taking an elbow to the head while playing basketball. It was a bloody mess, literally. I did make the shot, though.) I guess I'll have to finally retire the profile pic I use in various places, which was a picture taken by my friend Craig Earl Nelson (right), who passed away at the end of 2013.

Last, but hardly least, I started learning to play the 5-string banjo in January 2014. That's primarily where "blog time" went. And family life is keeping me busy, too.

Here's something I made up a few days ago that I'm pretty happy with, although the recording and the playing are rough:


And here's another song that's fun recorded a few months ago (although it turns out that I switched up some things from the version I'd been listening to. One nice thing about the Old Time scene is that variations on themes rather than lock-step imitation seems to be part of the tradition; I've heard over a dozen versions of Cumberland Gap and each one is a little different). "Ramblin' Hobo":


You can see the top of my other, fretless banjo in the background of this video. Maybe I'll post something on that soon. I'm working on something on it that's sort of a musical dialogue.
Posted by Matthew Pianalto at 12:53 PM 4 comments